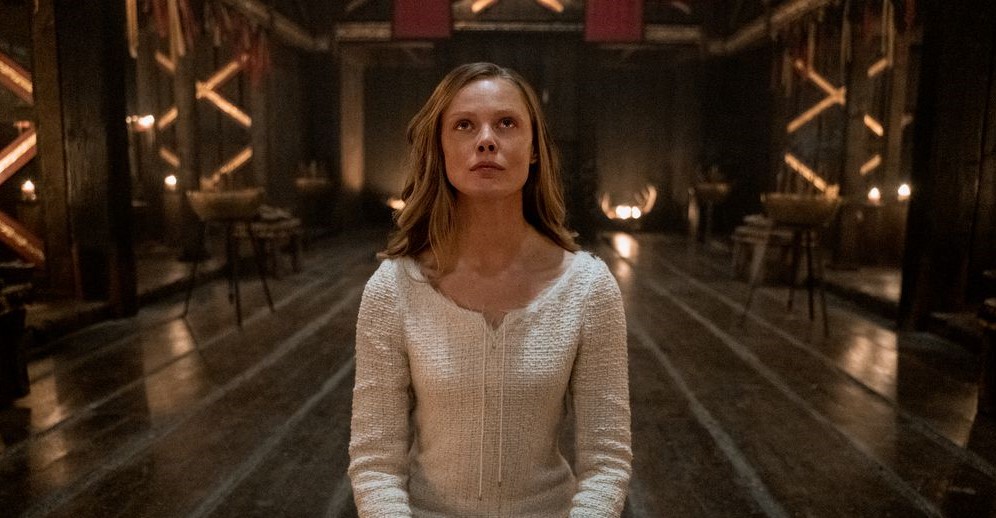 Since the enormous success of ‘Game of Thrones,’ sex and violence have become oft-used plot devices in medieval and fantasy settings. Scenes that involve either regularly draw attention to the projects they are part of. As a result, these scenes sometimes tend to become gratuitous, and even a show like ‘Game of Thrones’ hasn’t been able to escape this.

In contrast, the creators of ‘Vikings: Valhalla employ a surprising amount of restraint in its first season in this regard. It’s a show about the Vikings and a transitional period of the history of Northern Europe.

So, there are undoubtedly multiple depictions of violence, but they don’t feel out of place. And the creators have approached sex even more sparingly — there are only three of them in the entire first season. Some are meant to make you all hot and bothered, while others are soulful and even playful.

Historically, Harald Sigurdsson (Leo Suter) and Freydis Eriksdotter (Frida Gustavsson) probably never met each other. After all, she was presumably born 45 years before him, and their lives unfolded in different directions. But in ‘Vikings: Valhalla,’ the romance between these two characters serves as one of the main subplots in the first season.

Freydis has come to Kattegat from Greenland in pursuit of vengeance against the Christian man who raped and marked her. After braving through a storm, she, her brother, and their companions arrive at Kattegat.

She and Harald meet at the docks. A bit of flirting ensues, and in the next scene, they are having sex. Everything about it is very business-like. Freydis still has her tunic on, and they are very much strangers. Emma of Normandy (Laura Berlin) and King Canute of Denmark (Bradley Freegard) start the season as enemies. Emma is the queen of England. Her husband, King Aethelred II of England, orders his soldiers to massacre the Norse people living in his territory. This gives Canute the perfect excuse to assemble a massive army of Pagans and Christians alike and attack England on the pretext of vengeance.

His real intention is to establish an empire in Northern Europe. By the time his invasion begins, Aethelred II is on his deathbed. Although Emma’s stepson Edmund becomes king after his father’s death, Emma is the one who runs the war effort with the help of an adviser named Godwin.

Canute, perceptive as always, figures this out. After conquering London and establishing himself as the co-ruler of England, he begins actively courting Emma. It seems that he is fascinated by her charm, beauty, intelligence, and elegance. She didn’t let Norman’s origin stop her from winning over the English population. And that’s what Canute wants as well. He asks for her help, and in episode 6, titled ‘The Last Daughter of Uppsala,’ they end up in bed together.

Unlike the other entries in this list, the scene is slow but still brimming with passion. It seems that Emma and Canute have found their equals in each other. Soon after, Canute is informed about a developing situation in Denmark. What he doesn’t know is that it is orchestrated by his wife, Queen Ælfgifu of Denmark, on the advice of Olaf Haraldsson. He subsequently leaves for Denmark, but not before marrying Emma so she can still retain her position as the queen of England. The second time they have sex is after their reunion in episode 6. By then, both of them have accomplished much in their lives. Harald has played an important role in the conquest of England, while Freydis has become a shieldmaiden under Jarl Haakon. This scene is infinitely more passionate than the first one. They clearly have missed each other. The sensual interaction is also quite playful.

In episode 7, titled ‘Choices,’ they are still in bed together and begin to dream about a hopeful future. As the future king of Norway, Harald hopes to create a society where people of all faiths will live in harmony, and he wants Freydis by his side when that happens.